In previous posts I've reviewed apps available on the iphone for language learning, so today I thought I'd take a look at some available for Android phones . Actually, all of these come from the British Council, who really seem to be investing a lot of resources into creating mobile apps for ESL learners.

First up is Wordshake, basically a Boggle variant. You are given a four by four grid of random letters and then you've got two minutes to make as many words as possible using those letters. The smallest word must have at least three letter and - unlike Boggle - the letters don't need to be next to each other. You score more points the longer the word is, and at the end it shows you a list of all the words you came up with. There is also the option to submit your score online and also to go to the British Council site to play a multi-player version of it, but I couldn't work out how to do that. 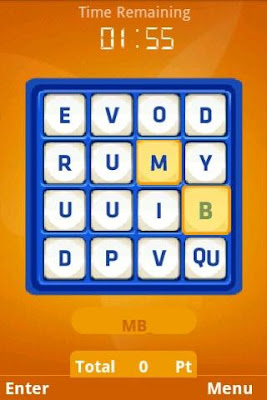 As a vocabulary game it's fun, but I'm not sure to what extent this is a dedicated language learning app and there are hundreds of other similar word games and word searches on the market that do something very similar. Ok for a few goes but not something you are likely to come back to very often.
Perhaps a more ESL focussed app is Learn English, a regular radio show podcast for elementary level students available for both iphone/ipod touch and Android. Based around a radio show with Tess and Ravi, the show has various sections, features, dialogues and at the end an explicit language focus where the presenter discusses some language points that have come up in the show. While the podcast is playing, you can follow along with the transcript or answer multiple choice questions about the show (couldn't actually check the answers on my phone, not sure if that's a bug with the app or with my phone). There are also links to Tess and Ravi's Facebook and Twitter pages where listeners can post comments and respond to what they've heard. 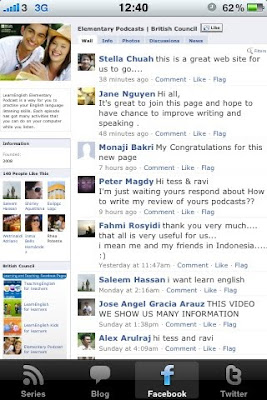 I like this a lot, it seems to be very much aimed at teenagers with its content and social networking features but  I also think adult learners could benefit from listening as well. Having the transcript to read along with adds a nice safety net feature for those students who panic when they don't understand what they are listening to.
You could argue that the podcasts lack a little authenticity and they do sound a bit like the kinds of listenings you get in coursebooks, but it is for elementary learners. It's easy to forget what it's like being a lower level language learner (I'm still struggling with the basics of Russian and suffer this on a daily basis) and the need for material that is around or just above their level of listening to allow them to be successful. Yes, it would be fantastic if students could always listen to 'real' material, but I know from my own experiences of trying to learn a second language that authentic material can be incredibly overwhelming and demotivating at times .
So yeah, definitely one to recommend to your students.
The British Council have created another game-like app for Android called Johnny Grammar's Quizmaster. I downloaded it a while back and tried it out, good fun but I remember the time available to answer the questions was ridiculously short and even I was struggling to answer most of the questions in time. I tried to download it again to test it out and see if anything had changed with it but it now doesn't seem to work on my phone.
Anyhow, I'm pleased to see the British Council pushing out these kinds of resources for mobile phones and doing it across more than one platform. It would be great to see them releasing these apps on Nokia phones (Symbian) as this would give a lot more students in developing countries the chance to experience them.
Posted by Unknown at 02:46 4 comments: Links to this post

I haven't blogged for a while because we're between terms at the moment and haven't had a chance to try anything new out with my class. However, the summer school begins in a couple of weeks time and so I plan to get back into experimenting with different aspects of mobile learning when that starts.

One thing I plan to do in the near future is providing video reviews of useful apps for ESL students on a variety of mobile platforms. I'm rather limited by the devices I actually own, so I will probably be able to do them for iphone/ipod touch, Android and maybe Symbian (I have an old Nokia that I could try some out on). I will be doing these mainly for my own students, so they will be presented in a way that is accessible and understandable for them.

I wanted to start this a few weeks ago, but I'm waiting for a piece of hardware that will enable me to take video screencasts of a mobile phone's screen. I've discovered that it's incredibly difficult to do this on most mobile phones - especially iphone and Android - and it can't be done using software on the phone itself. Instead, I'm going to use a special USB camera that can take close-up video of the screen and then record it to the computer.

Anyhow, I've got a few ideas for apps I'd like to review (the British Council's My Wordbook and a few others spring to mind), but if anyone would like to suggest any they think it would be useful for me to look at, I'd be happy to review them.
Posted by Unknown at 03:00 No comments: Links to this post