The role of the ipad in ESL

Ok, I caved. I wasn’t planning to buy an ipad, but after looking at one in a store and debating internally for about...ooh...four or five seconds, I handed over the money and walked out with the cheapest 16GB wifi version. 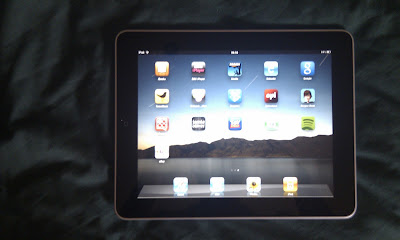 my ipad...apologies for the quality, taken with my cameraphone

It is a gorgeous piece of tech, heavier than you think it will be but the screen is perfectly sized for watching videos, browsing the internet and reading ebooks when lying on the sofa or your bed. It does get a little weighty in your hands after a while and you find yourself having to adjust your hands and position to get comfortable again. I also found that my hand naturally covers the speaker on the right hand side when watching video and can mute it, so I have to move a little to uncover it.

It is clearly pitched between a laptop and a smartphone and it does seem to occupy that niche very well. Many people say it is just a large ipod touch, but I would question that ‘just’. Yes, it is a large ipod touch, but that isn’t a bad thing at all. The added size and the tablet form factor makes it inherently more social than a laptop or smartphone. When I got home with the ipad - and gotten over the slightly embarrassed explanation of why I’d bought it given the number of similar gadgets in our house - my wife and son immediately wanted to get their hands on it and it felt very natural just to pass it around and share as you would a newspaper or a photo. Reading ebooks on it was very comfortable, it was great to sit down on the sofa with my son and read him the Winnie the Pooh book while he followed along and looked at the pictures.

There are some obvious drawbacks, the lack of flash in the browser and the lack of multi-tasking being just two, but I think they are non-issues. Multi-tasking will come in the autumn with an OS update and most sites that require flash are likely to have a custom-made app for the ipad sooner or later.

A bigger issue for me is text input. The onscreen keyboard just isn’t that comfortable for extensive text input, and in fact it is far more awkward than the iphone because it’s so large. You can’t grip it in two hands and type with your thumbs like on the iphone because it’s just too wide and it doesn’t feel natural to lay it down on a flat surface to try to type like on a full-sized keyboard. You end up holding it in one hand and then tapping on the keyboard with another, but this is really slow. I wouldn’t want to write a long email or conduct an IM conversation with anyone using this technique.

The best way is to use some kind of external keyboard and Apple has released a keyboard and dock combo for it (for £55!), but this naturally limits its portability. I did have an old fold-up Stowaway bluetooth keyboard lying around and it paired and worked perfectly (see pic below), but the problem is then that you need something to prop the ipad up so you can see it. I might need to buy a cover with an integrated stand, but again this all just adds to the cost and bulk of the device. 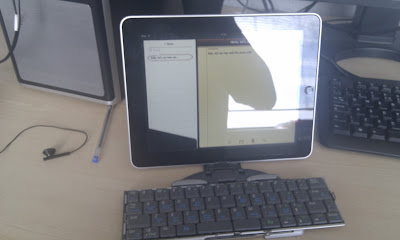 the ipad paired with a bluetooth keyboard


Overall though, it really is a lustworthy piece of tech and this is coming from someone who is NOT a particularly big Apple fan. I don’t own an iphone, preferring Android as a smartphone OS and I’ve never owned a Mac (either desktop or laptop).

How it could be used in (and out) of the ESL classroom.

When I first heard and read about the ipad, I was dismissive about its usefulness in ESL. But having used one now for a couple of days, I can see that it could be a wonderful tool in the classroom. Why?

Firstly, it is not a complicated device to use as anyone who owns an iphone, ipod touch or ipad will testify. In many ways this is better for the teachers than the students as it’s often the teachers who are most freaked out by tech in the classroom. It’s very unlikely that teachers will need much technical support after a little initial training with the device and the likelihood of it breaking down in class are fairly minimal. Also, it’s instant on, there’s no wait for it to boot up and the battery life is outstanding, you can easily get 10-11 hours of intensive use out of it from one charge.

As mentioned above, the size and form factor of the ipad makes it perfect for collaboration. Just as it’s easy for a student to show their partner a page from their notebook, it’s just as easy for a student to show something on the ipad screen. This is also helped by the wide viewing angle it has. Smartphones are great, but the screens are small and there’s a limit to what can be displayed on it. Laptops - even the smaller netbooks - are more cumbersome to move around and they naturally create a barrier between one student and another (though they do have the advantage of a keyboard). If we think about a communicative classroom where we want students to talk and share with each other, move around and interact with each other, the ipad seems perfect for that.

Despite those damn adverts, the popularity of the iphone, ipod touch and ipad means that almost any computer or web tool that you might want to use with your students is available on the device. When I think of the kinds of things that I take my students into the computer room for, I can almost always find an ipad app that can replicate that function. Creating blogs, wikis, podcasts, various forms of social networking, you tube videos, news sites, all of these things can be done directly on the ipad.

No more ‘we’re going to the computer room today’

One of the barriers to full integration of technology in the (ESL) classroom is the classroom/computer lab distinction. Somehow, going to the computer lab is seen as something separate from what goes on in the classroom, there are teachers who ‘use’ the computer room and those who don’t. In this way, computers and technology become this scary other that naturally makes a lot of teachers nervous.

Obviously a major barrier is going to be the cost of these things. I bought the cheapest version here in the UK and it cost  £429 while the most expensive version with wifi and 3G is a whopping £699. Even a class set of these is going to be beyond most institutions. And to be honest, Apple are not particularly great at providing discounts for bulk purchases of these things for education. But the hope is that over time (just as with smartphones and laptops), other companies will come along and provide similar products at a lower price point. There have already been several tablets released running the Android OS and the number is bound to increase over time. A few years ago it would have been unthinkable for all your students to have smartphones in class, but this is becoming more and more a reality as the cost of them comes down.
Posted by Unknown at 04:17 6 comments: