Google+ in the ESL classroom?

Over the last few weeks Google+ has got a lot of publicity, the new social network from the search experts which looks to go up against Facebook. As a heavy Google user - I use Gmail, Reader, Documents, Maps, Sites and Calendar on a daily basis - the possibility of a social service that will ultimately integrate all these features is very attractive. I do have a Facebook account - and let's face it, who doesn’t these days - but it’s not something that I use on a regularly basis, I find the endless stream of pokes and virtual gifts and info about people’s exploits on Farmville dull and annoying.

The problem at the moment with Google+ is that it’s difficult to actually get a chance to use it, it’s in limited beta and you need an invite to join. Luckily though I managed to get one and I’ve been trying it out over the last few days.
Whenever I look at a new web 2.0 tool these days, my first question is always: how could this be used with my students? Just from a very sketchy, limited use of Google Plus I think that it could offer more to the classroom than either Facebook or Twitter. Both of these tools do have their place, but the limited group functionality on both of them do set limits on their use in education. I’m always looking for tools that will allow me to work just with my group and to protect their and my privacy along the way. Twitter’s default public setting makes that difficult while Facebook seems to require you to share too much of your private life with students to create a group.
So, I’m going to look at the features of Google+ that I think could have specific applications to the ESL classroom as well as discuss some of the limitations.
What Google+ can offer to the classroom
Circles
Circles is the central feature of Google+. It is a clever filter that allows you to easily put your friends, acquaintances into groups (‘circles’) and then decide what information you choose to share with them. There are certain default groups (friends, family etc) but you can create as many new circles as you want with whatever name you choose.
When you post something, you can easily choose to share it with an individual, a particular group or group of groups or to make it completely public. Also, when viewing other people’s posts, you can choose to see information just from a particular group. In Google’s language these posts are called your ‘stream’ and you can filter by clicking on the appropriate group on the left.

I think the benefits of this for the classroom are obvious. Being able to create a group just for your students and then share documents, information and links just with them is very useful. Even better, you can share on a more global or specific level with your groups. You might want to share a post with all your groups if it’s relevant to all your students - for example, you’ve found a particular link that would be useful to all of them - or you might just want to send a message/post to one group.

By the way, this is not really anything new. In a previous post I talked about Edmodo, a social network designed specifically for education, where you can do exactly the same thing. You can create numerous class groups and then share information with either individuals, groups or everyone. 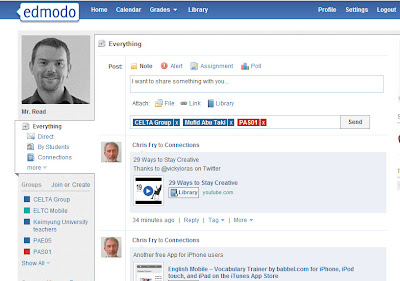 There are other similar online services such as Schoology, Twiducate and Wiggio where I would imagine you can do very similar things. Also, these specific educational networks tend to have better integration of things like document sharing, assignment submission  than more generic social networks such as Facebook.
So why might you want to use Google+ rather than these tailor-made services? A couple of reasons spring to mind:

First, it creates a one-stop shop for personal/educational networking. Students can easily flip between their social streams and their educational streams without having to leave a particular website and go log in somewhere else. One of the biggest problems I have with using web 2.0 tools with my students is that they constantly require students to register for different websites, remember their passwords and then remember to go there to check whether anything new is happening. Actually getting students to go to the website you’ve asked them to is often the biggest issue.

However, getting them to go to Facebook is less of an issue - when I take them to the computer rooms at our school, their reflex action once they open up the browser is to check their Facebook page. If Google+ gained some traction as a social network, students would be able to go to this one place for both their personal and class interaction.


Of course, whether this mixing of social and educational interaction is something people want is debatable. What I do think people want though is simplicity and if one site allows you to clearly separate and blend (if you want to) your personal and educational connections, I think that would be very attractive.
Hangouts

It’s a hipsterish name, but basically Hangouts is group video chat. You can invite members of your circles to chat using their webcam and you can have up to ten people in the group. There is also a text chat option available so you can share documents/links etc and a special option to share You Tube videos. I haven’t really had the chance to try this out as I’ve only been on Google+ for a few days and not many people I know have invites but I can see some possibilities for education.
The fact that it can handle ten people in a chat means that small class discussions/seminars are possible. Students themselves could also use it for discussions if working in groups. Although it hasn’t been implemented yet, I’m pretty sure that at some point there will be a chance to work on a Google Doc while having a video discussion in a Hangout making the process of collaborative work much more interesting. At the moment, I believe that it’s not possible to just view a hangout (i.e. just watch others talking with the option for individuals to temporarily join) but again this should come in the future and would be great for large group webinars/discussions.

Again, none of these features are particularly revolutionary, there are many services such as Adobe Connect, Elluminate, Go to Meeting where you can have group video discussions and online seminars, but they can be expensive and complicated to set up.

Where I think Google+ might add an extra dimension is in the integration of all the other Google services such as Search, Maps, Documents, Photos. The possibility of using all these wonderful and familiar free tools within a group video chat is one that as a teacher I would really welcome.
Mobile integration

Given the title of the blog, I’m naturally interested to know to what extent Google+ will work on mobile devices. As you might expect, there is an app already available for Google’s own mobile OS, Android, and one coming very soon for the iphone.
The app for Android is very nice, most of the things available on the web are available here, the most obvious omission though being the Hangout function - most phones struggle with one person in video chat let alone ten. In its place they have the unique (to the phone app at least) Huddles, which is a group text chat feature. Rather like Hangouts you can invite individuals or circles to participate in the chat. One limitation is that you can only create a Huddle on phones, it’s not possible for one person to be chatting on his/her phone while others are on their computer. However, I would imagine that is something that will come in the near future.
Sharing from your phone to Google+ is incredibly easy, webpages, pictures, notes can be easily posted to your stream. Android has always done sharing so much better than the iphone and this is a perfect example.
Potential issues with Google+
At such an early stage, it’s very difficult to be overly critical of Google+, it’s still in beta, things are being changed all the time and I’m sure many new features will be implemented in the coming months. However, in terms of widespread adoption in education there are some potential drawbacks.

Enough said really. So many people are committed to their Facebook profile, have built up so many friends and photo albums over quite a long period of time that they may have no interest in joining another social network  and may feel resentful if their teacher asks them to.

The other possibility is that Facebook may implement features that make it equally compelling for educational purposes. They’ve recently integrated Skype video chat - albeit only one on one - and there may be other features on the way that will make moving to Google+ unnecessary.

As I’ve discovered when trying to use Google services with my students, there is a lot of confusion surrounding Google accounts. People naturally assume that to have a Google account means having a Gmail account, but that’s not true. You can have a Google account using any email address, however signing up for Gmail will automatically give you a Google account. You would be surprised how difficult it is to explain this to students!

There is also the additional problem of Google Apps, the specialized service Google run for businesses and educational establishments. For example, my university use Gmail for their email and we have our own domain name in our email addresses (@sheffield.ac.uk). Along with email, students and staff also get access to other limited Google services such as Calendar, Docs, Reader and Sites, but NOT things like Maps or Photos.

I have personally had issues when trying to share things from my personal Google account with my students Google apps accounts. For example I have tried to share Google Docs with them and this seems to cause some issues which mean they can’t access them.

So, what is going to happen with all these Universities and Colleges that use Google for their email? Will Google+ be available for students using those email addresses? Are there going to be issues when a student tries to sign up for Google+ using their Google-provided email address? I don’t know if Google have thought these issues through, but they are essential to sort out if they want schools and colleges to use it.

I’m impressed by Google+ and I can see a lot of potential there on both a personal and professional level. Just on a personal level I’ve been wanting to get out of Facebook for a while now and this gives me the perfect opportunity. On a professional level I’m very interested to explore how Google+ can be used both for my own development through contact with other teachers but also how it could be used with students to increase their involvement and interaction with the English language and with each other. Over the summer I have a group of teachers coming over from Korea for a teacher training/language development course and I’m going to see if any of them wish to sign up for Google+ and take part in a trial run to see how it might work with students. I’ll let you know how it goes...
Posted by Unknown at 12:18 8 comments: