Most people trying to learn a language have probably used flashcards to help them remember vocabulary. Either a stack of cards in their pocket that they pull out and check on a regular basis or they might do things like sticking post-it notes around the house to indicate different objects. I’m trying to learn Russian myself at the moment so I’ve been looking into some of the apps available on the Android platform that might help me remember new words more easily. The great thing about having it on your phone is that you’ve always got it with you so it’s an easy way to revise when you’re stuck waiting around somewhere or when you’re on a bus or train.

If you are a teacher, it might be a good way to encourage students to study the vocabulary they’ve learnt in class or you can create vocabulary lists that they can then import into their flashcard apps on their phones or mobile devices. Below I take a look at a few and make some comments on their usefulness for students.
Vocabulary Trainer for Gdocs
This is the one I’m currently using for two reasons: firstly, it’s free (easily the most important in my view, I don’t really see the point of paying for such a simple app) and secondly it integrates with Google docs, something I’m an avid use of. So, the first thing I had to do was create a spreadsheet in Google docs with the words I want to learn in two columns like this. 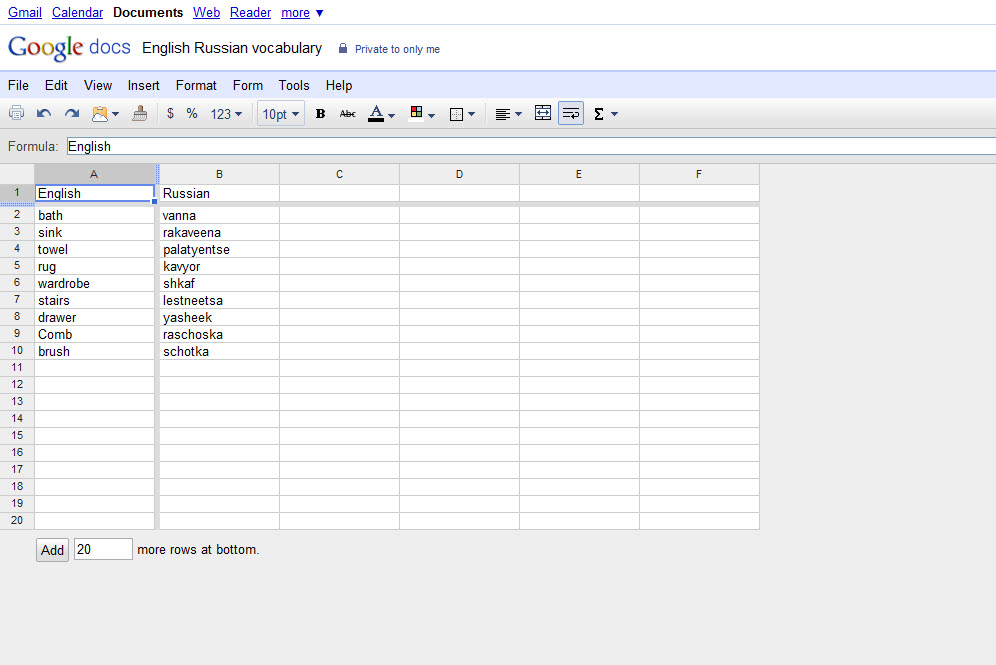 You then give the app permission to import this and then it can create flashcards based on the columns. When you want to revise the vocabulary, you can then use the settings to decide how you want to see the cards (Eng-Rus, Rus-Eng) and whether they will show the other side of the card automatically after a specific number of seconds or manually when you swipe the screen. So you will see something like this: 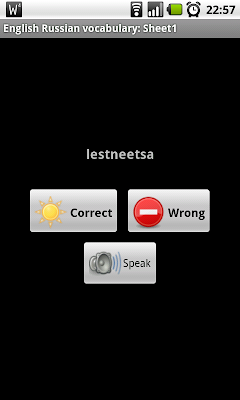 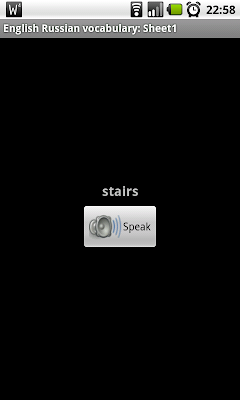 You will see on the side with the English word there is the option to have the pronunciation, which is not much use to me but would be wonderful for ESL learners.

I like this app, it’s relatively simple to use, you can tweak it for your own personal needs and it’s free. The downside to it is that you cannot create flashcards on the phone itself, they have to be done in Google and then imported, so if you don’t use Google then it’s not terribly useful. However, if students do have a google account, you could easily create a word list and then share it with them via google and then they could download it for themselves.

StudyDroid
This was another free app to download, I’ve only played with it a little but it does seem a little easier to use than the one above and you are not tied into Google to use it. However, you do need to set up an account on their website and you can then sync between your phone and your word lists. This is what the website page looks like where you create your word lists. 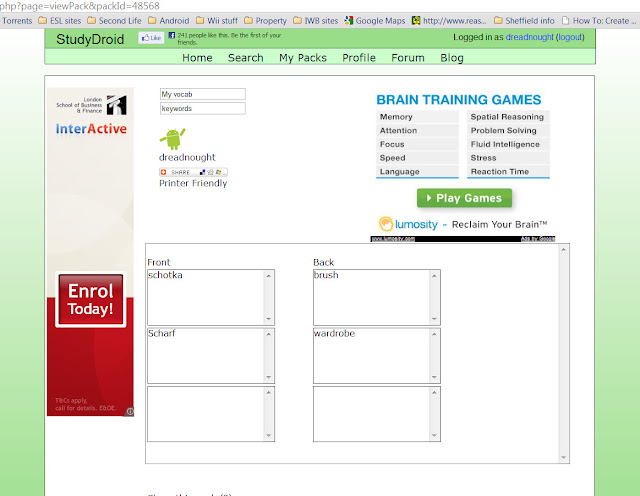 Once you’ve downloaded them, you can then view your flashcards on the phone. 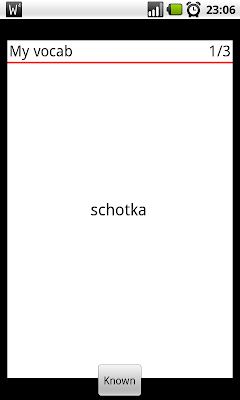 You can see there is a ‘known’ button on the page. When you feel you know the word/translation, you can press this and it will keep a record of the percentage of the list that you ‘know’ and display it. You can also choose to hide or show the ‘known’ words.

A couple of things l like about this app is that you can add to your word list on the phone itself and you don’t need to do everything on the computer (though as far as I can see you can only initially create a list on the website). The other thing is that you can share your lists with others and download lists from other people. On the studydroid website there is a section where you can search through people’s lists and find something interesting or relevant for you. So, for example, I wanted to find some Russian word lists and found these: I did a similar search for English lists and there were naturally more, but not that extensive and the search engine doesn’t enable you to really filter your search. It does rely on a community of studydroid users that may or may not exist into the future.

I might persist with StudyDroid and see how it compares over time with the Vocabulary Trainer. I like the fact that you can modify your lists on the fly and the ‘known’ button adds that element of progress to your vocabulary retention. I am just concerned about being tied into their website and wondering what happens if they go out of business. At least with the Vocabulary Trainer I know that Google are always going to be there.
Kaka flashcards

Like StudyDroid, I haven’t had this on my phone for long and - despite its unpromising name - it does have a lot going for it. Most notably, it can link up with the website Quizlet, which is a repository for a huge bank of vocabulary lists. If you are not familiar with Quizlet, it’s a website where you can upload and download flashcards, take quizzes and share lists with friends. Certainly a site worth recommending to your students. 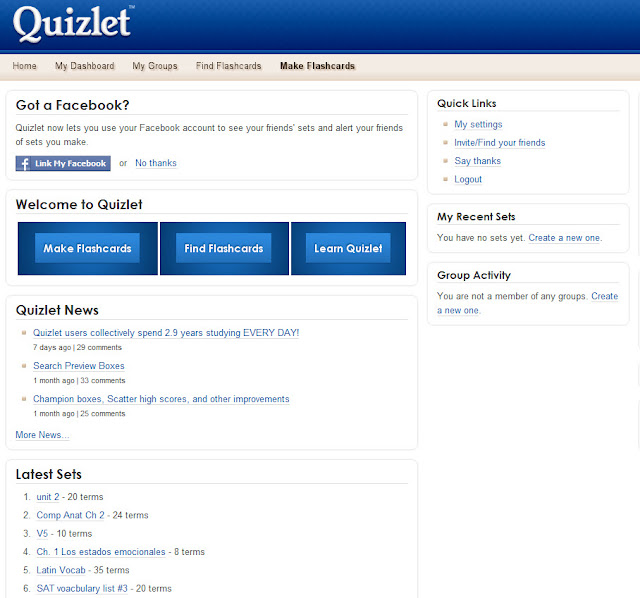 Kaka Flashcards gives you access to all their lists through a search function and you can download them onto your phone. Similar to the other applications you can then test yourself by viewing one side of the card and then tapping to see the other. There doesn’t seem to be the extensive tweaking available for this as there is for the other two, but I suppose the access to the Quizlet database does make up for this. 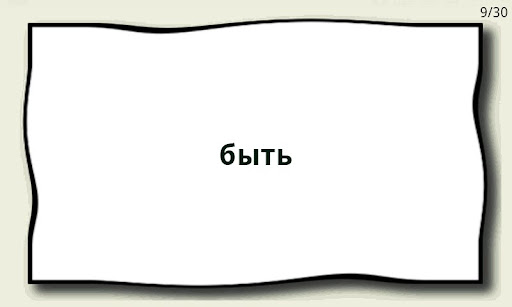 The other good thing about this app is that you can actually create lists on the phone itself and you don’t have to go to the website to do that. While this app is not the most visually appealing, the link to the Quizlet website means that teachers and students can share lists and find loads of useful vocabulary items to put on their phone.

There are numerous other flashcard apps available on the Android Market, I just selected three to look at. If you go to a site like AppBrain, you can search for flashcards and get a very long list of applications that can be used in one way or another for language learning. Many of them come pre-packed with vocab lists and can be downloaded for specific languages (e.g. French-English, Greek-English etc). The great thing about the Android Market is that you can buy an app, try it out and as long as you uninstall it within 24 hours, you get a refund. This means you can try out paid apps without worrying that you might be wasting your money.

I think teachers could really exploit these apps to encourage students to review and remember vocabulary from the lesson. It wouldn’t be too difficult to create class lists and make them available on sites like Quizlet for students to download. Even better, get the students themselves to create them and share them amongst themselves. And although I’ve only looked at Android apps today (largely because that’s the only phone I’ve got), there also apps for the iphone/ipad that can access sites such as Quizlet. Anything that encourages students to engage with vocabulary has to be a good thing.
Posted by Unknown at 15:41 7 comments: Links to this post